Greetings from Taro Kageyama
The first Chair of the Steering Committee

What makes a human a human – is language. Of all the living things on the planet, humans are the only ones who can freely use a complex and sophisticated language system within a few years of birth. Also, by making the most of language, humans have been able to build the society and civilization that we know today. It is no exaggeration to say that language is not only a tool for communication, but also a source of thoughts, ideas, creativity, and human beings themselves. In spite of its importance, the significance of studying the abstract mechanisms of language itself, the actual use of language in the real world, and the process of learning a mother tongue or a foreign language is unfortunately not well recognized by society. However, we who live in the present age have an obligation to further develop and pass the human asset, that is language, on to future generations.

Until now, research on language has been conducted by individual researchers or by academic societies, which are groups of researchers. Today, however, with the crisis of language on a global scale, it is an urgent academic task to promote language research on a larger scale, beyond the level of individual researcher or academic society. To this end, it is necessary for many linguistic societies that share common interests and goals to work together to achieve a higher level of academic research.

This kind of cooperation among academic societies is also required from a social perspective. Compared to the natural sciences, the humanities have an extremely limited voice in society at-large, and it is extremely difficult for a single academic society to make statements and proposals that can penetrate society as a whole. The cooperation of a large number of academic societies is essential in order to disseminate knowledge and understanding of language to the general public and to convey the importance of academic language research.

With this in mind, and with the encouragement of Science Council of Japan (Committee on Languages and Literature), the United Associations of Language Studies (UALS) was formed with the following five societies as its Executives: The Linguistic Society of Japan, The Society for Japanese Linguistics, The English Linguistic Society of Japan, The Society for Teaching Japanese Language as a Foreign Language, and The Japan Association for Language Teaching (JALT) (in the order of KAKENHI subdivisions). UALS was established on April 1, 2010. With the support of 22 academic societies in addition to the Steering Committee of the five academic societies, a total of 27 academic societies are currently members of UALS (See the top page for the names of all affiliated academic societies).

The purpose of this association is “to contribute to the harmonious development of linguistic studies and related fields, to strengthen collaboration among member societies while respecting and supporting their own activities, to deepen international cooperative relationships, and to make multifaceted contributions to solving social problems.” The following specific activities are to be carried out (from the Articles of Association of the United Associations of Language Studies).

However, it is practically difficult to carry out all of these activities from the very beginning. For the next few years, we will be exploring and implementing some of these activities and developing the infrastructure to enable us to carry out as many of them as possible. In the first year, we will start with the basics, such as making it easier for members of each society to access other member societies by linking to the websites of the member societies, and making it easier for members to obtain information on the conferences of the member societies by posting a “calendar of society events,” as noted in (1). It may be difficult in the first year, but in the future, we hope that multiple societies will collaborate to hold symposiums and other activities, as noted in (2).

In today’s social climate, social communication in (4), is one of the most important matters required of academic societies. As part of this effort, in the first year of the conference, we are planning to hold an open symposium to discuss the current state and future of the Japanese language in cooperation with Science Council of Japan (Committee on Languages and Literatures) as follows:

Open Symposium (Co-sponsored by Science Council of Japan and UALS)

As described above, UALS aims to enhance academic research and further contribute to dissemination of academic achievements to society through mutual collaboration and cooperation, while respecting the goals and activities of each society. In order to achieve this goal, the voluntary participation and active proposals of all members, including the representatives of each member society, is essential.

In addition, in order to make this activity even stronger, it is highly desirable for related societies that have not yet joined to become members. We will continue to accept applications for membership, so if you agree with our aims, we hope you will join us.

I would like to ask for your cooperation and guidance so that UALS will serve as a solid foundation for these activities of all linguistic societies in Japan, and so that the research and application of language in Japan will be greatly advanced. 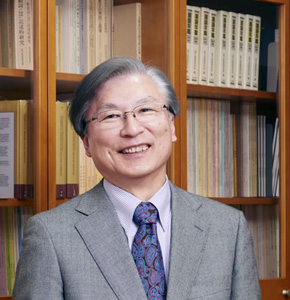 Globalization organizes the complex systems of civilization and enhances human interaction across regional and national borders, but at the same time, it makes competition among nations and regions even more fierce. The academic world is not exempt from this competition. While academic competition in the same field is the way it should be, inter-disciplinary competition can lead to inappropriate results, if there is no legitimate criterion. For example, if research in the humanities is neglected on the grounds that it is not directly related to competition in the economy, it would be a great loss for the future of humanity. However, looking at recent trends, especially in Japan, it can be said that the tendency for the humanities to be neglected in comparison to other fields is becoming stronger and stronger. Language is deeply involved in all aspects of human life, and I would like to believe that the importance of its research is widely recognized by the general public, but it is still a part of the humanities.

The study of the humanities is essentially something that each individual can do freely, and there are some aspects of it that do not lend themselves well to the idea of forming coterie and engaging in group activities. However, it is difficult to ride the wave of globalization with the same type of activities as before. In fact, there is a great possibility that we will be swallowed up by the waves and consequently will decline.

The formation of an association of academic societies related to linguistic research and the establishment of a forum for shared discussions among them is a wise decision in keeping with the times. In some respects, it is like a zebra forming a circle and jumping up on its hind legs to drive away the enemy, but it can be a particularly appropriate group for global competition in language research.

I would like to congratulate the United Associations of Linguistic Studies on its inauguration and wish that this new organization will overcome the current difficult times and successfully carry over Japanese linguistic research to the next era.